The document, photo and film archive at the GMZ 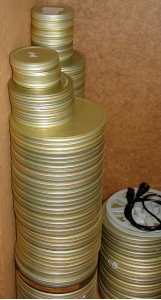 In the course of the liquidation of the former VEB Maxhütte, a number of important documents and records were transferred to the Thuringian State Archives. A large part, however, remained in Unterwellenborn. For example, many technical drawings, operating instructions, the complete collection of the works newspaper "Unsere Hütte" (Our Steelworks) from the beginning of its publication in 1946 until July 1992 and brigade diaries that provide information about life in the Maxhütte collectives.

The archive of the former Maxhütte photo office includes several thousand negatives, which were already sorted, catalogued and partly processed (positive prints were made) by several employees at the beginning of the large-scale job creation programme in 1992. At present, the photo archive is being completely digitised.

All these archive materials are available to interested scientists and journalists for their scientific and journalistic work and can be viewed on request in the building of the gas machine headquarters. It is not intended that they be taken away. Enquiries will be answered with pleasure.

Like many other state-owned enterprises in the GDR, VEB Maxhütte had its own company film studio, which started work after the construction of the Palace of Culture in 1954/55. The members were all amateurs who gradually took part in qualification courses to familiarise themselves with their special field of work. The films were shot on 16mm material from GDR production, using both real amateur equipment and semi-professional camera technology. The studio had its own editing and sound technology rooms in the Kulturhaus and also had a small laboratory where most of the exposed films were developed. The final copies of the sounded films, however, were pulled in Babelsberg.

In 1992, Michael Goschütz, who was responsible for club and circle work at the Kulturhaus from 1977 to 1984, rescued the films, which were already lying on a pile of rubbish because the Kulturhaus was to be handed over to a private investor swept clean. The films offer a unique insight into the everyday production life of Maxhütte as well as into the everyday life of its employees. (It should be noted, however, that not all the films ever made by the company film studio have been found. Some of them are probably in private possession or have been lost...).

In the meantime, all films have been copied onto digital media and can be shown at screenings at the Gasmaschinenzentrale or purchased (see also our menu item "Shop").

If you would like to know more about the company film studio of VEB Maxhütte, you can download the PDF below. The last 6 issues of the company newspaper "PROFIL" - Volume 2 - 1992 are also available as a PDF download.

History and films of the company film studio MHU